The start of a new year is a time filled with resolutions, goals and excitement. In Spain, the little ones are restless because one of the most important days of the year is approaching: the Three Magic Kings are coming. But…Who are these characters and why are children in Spain so mesmerised by them? At Well and Come, our boutique hotel in Barcelona, we will be telling you all about this beautiful and age old tradition which will add a touch of magic to your stay in Barcelona with the little ones.

The origin of the Three Magic Kings

The day of the Three Kings is a catholic tradition that dates back to biblical times where the three Magic Kings set off on a journey from the Far East to Jerusalem in order to worship the newly born baby Jesus and offer him gold, incense and myrrh. These three characters were Melchior, who stood out for his white hair and beard; Gaspar, who was a redhead and Balthasar, the black King. This magic story is still told today, at midnight of the 5th to the 6th of January the kings visit the homes of the children in Barcelona and the rest of Spain to give them gifts only if they have behaved well.

The parade of the Kings in Barcelona, near to Well and Come

The night before this wonderful event happens, the children head out to the main streets of their towns or cities to watch the parade of the Kings, during which these magical characters ride along on their floats throwing sweets and presents in to the crowds. Once the parade has ended, the children must head home to bed, before the kings start to leave all of the children’s presents in each home. The parade in Barcelona, the city which our boutique hotel calls home, begins in the Port Vell, where they arrive by boat and begin their trail to the main streets of the city until they reach the Fuente de Montjuïc three hours later. 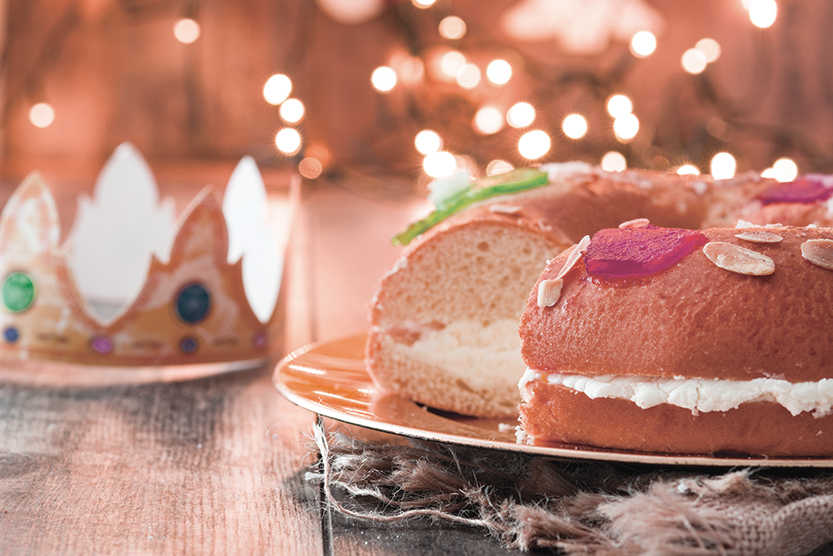 The dinner of the Kings in Barcelona

On the following day, after the joy of the gifts, which are opened in the early hours of the morning, a typical family dinner is held which ends in a traditional dessert: the Roscón de Reyes. It is a type of round cake with a central hole which is decorated with glazed fruit and can be filled with cream or other complementing fillings. In this creation two small objects are hidden, so you have to be careful when you eat it: hidden within it is a Magic King and a small bean. Once the Roscón has been divided up, it’s handed out to those around the table. Whoever is lucky enough to have the piece with the Magic King is given a paper crown as a symbol of good luck. Whoever gets the bean, on the other hand, has to pay for the Roscón.

Reserve your room at our boutique hotel in Barcelona

When travelling to Barcelona with children the best way to understand its history and traditions is through its customs. That is why the team at Well and Come, our boutique hotel in Barcelona, would love to welcome you and guide you through what to do in Barcelona and it’s essential attractions, as well as the best time and places to see the parade of the kings in the beginning of a magical year for all the little ones and the not so little ones. The Three Magic Kings are on their way with their presents. Have you behaved well this year?

Celebrate Christmas and New Year close by to our boutique hotel in Barcelon...

Well and Come, your boutique hotel in Barcelona for the Mobile World Congress...
Scroll to top
This website uses cookies to improve your experience. We'll assume you're ok with this, but you can opt-out if you wish.Accept Read More
Privacy & Cookies Policy