You don’t need to be a rocket scientist, nor to live in Spain, to know that Sitges has been one of the most important international film festivals for the last fifty years. Quentin Tarantino, Sir Anthony Hopkins, Jodie Foster, Paul Verhoeven, Ralph Fiennes, George A. Romero, Cameron Diaz and Viggo Mortensen are some of the stars which have attended the world’s first fantasy film festival. At Well and Come, boutique hotel in Barcelona, we want to tell you about what happens at this festival and why it is a good idea to stay with us during these dates.

A horror festival with more than 50 years of international recognition

The first edition of the Sitges festival was in 1968 and titled as the 1st International Week of Fantasy and Horror Films. Since then it has been the star of a cultural event with the most media resonance in Cataluña. During this annual macro convention, various cinema lovers come together, such as cinemagoers, the industry professionals and those who want to know the latest technological and artistic trends from the big screen. The 51st edition will be held from the 4th to the 14th of October in the screening areas of Auditori Melià Sitges Cinema Retiro, Cinema Prado, Brigadoon and Sala Tramuntana which are in the area of Sitges, on the Mediterranean coast, 38 km south of the provincial capital, Barcelona, the city which hosts our boutique hotel.

Nicolas Cage and Ed Harris at the Sitges Film Festival

One of the most well-known and well recognised celebrities of contemporary cinema will be at Sitges 2018. Nicolas Cage will attend this year’s edition to receive a Great Honorific Prize and to present Mandy, the Panos Cosmatos’ thriller in which he plays the lead role. Also, the well-known actor and veteran, Ed Harris, known for films such as The Hours, Pollock, The Truman Show and Apollo 13, will also receive a Great Honorific Prize. 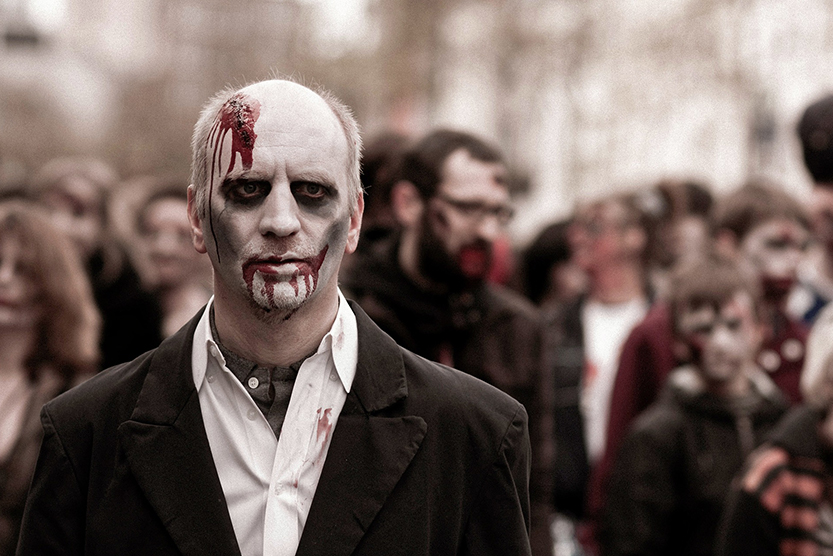 Recommended by our boutique hotel in Barcelona: a night of zombies

This year’s edition will also face an invasion: zombies will come out at night looking for brains to feed on. Making the most of the general themes of the screenings at the Sitges Festival, on Saturday the 6th of October some 350 people will be given a complete make over for free during the day so that they are ready to head out around Sitges dressed as zombies. The tour will end with a concert by the Motorzombies. A completely terrifying experience.

How to get to Sitges from our boutique hotel in Barcelona

There are many ways to get to Sitges from the city of Barcelona. If you are planning to travel by day, it’s most likely that you will want to travel by train or by bus, which are the most cost effective and quickest options. Also, it is good to know that once the normal bus timetable ends there will be a special night bus which will be running between 00:55-05:51.

Reserve your room at our boutique hotel in Barcelona

Make the most of these dates to visit Barcelona. You will discover a city open to a world of culture, cosmopolitan and unforgettable. Our boutique hotel in Barcelona, Well and Come, offers a relaxing and special stay so that you can rest between the goings on of the Sitges festival. We have an exclusive rooftop with views of the city and the upmost comfort in our rooms. Also, the hotel has available excellent transport services, whether it be a train or bus. Reserve your room on our website and enjoy up to 50% off breakfasts and packs!

Live your own true story at Well and Come, our Boutique Hotel in Barcelona